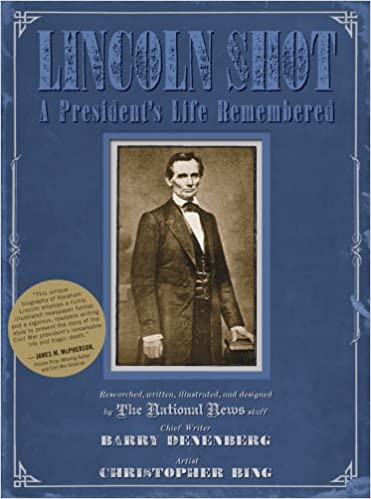 Lincoln Shot So begins this intimate portrait of Abraham Lincoln. Conceived as a one year anniversary edition of a newspaper, dated April 14, 1866, strongly evocative of the time and the nation's mood. The moment-by-moment recital of the events of the day that ended in assassination holds readers enthralled awaiting the tragic end. The account of the flight, capture, and hanging of some of the conspirators is riveting.

From there, Denenberg moves to the log cabin in Kentucky and Lincoln's life unfolds. The boy, the man, the husband and the father is portrayed as a trifle clumsy, often unsure of himself, and plagued by dark moods. Denenberg's Lincoln is ambitious and modest. He struggles with his role as leader as the Civil War nears.

In the third part of the book, the year-by-year account of the Civil War is seen through Lincoln's eyes. Every defeat and every victory deepens his struggle and resolve.