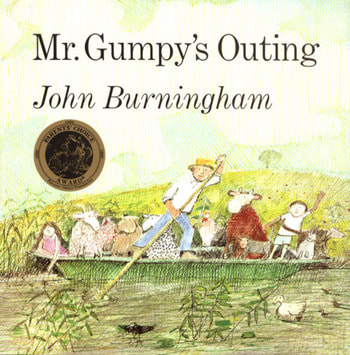 Mr. Gumpy lives by a river. One sunny day he decides to take a ride in his small boat.

It is such a perfect idea, for such a perfect summer day, that he soon has company: first the children, then the rabbit, the cat, the dog, the pig, the sheep, the chickens, and still others until-- Mr. Gumpy's outing comes to an inevitable but not unhappy, conclusion.

"Come for a ride another day," says Mr. Gumpy at the book's end. And young readers will return again and again to this sprightly story with its clever, captivating illustrations that reflect the sunlit quality of a lazy summer afternoon.

An ALA Notable Children's Book

A Child Study Association Children's Book of the Year

A Library of Congress Children's Book of the Year