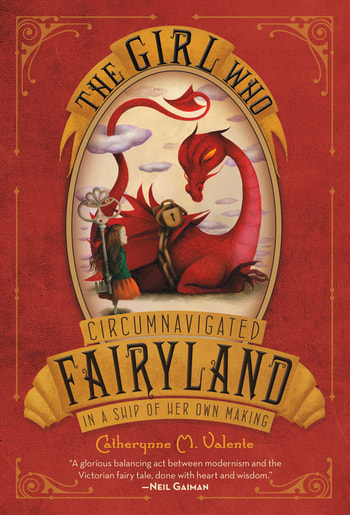 Fairyland #1: The Girl Who Circumnavigated Fairyland in a Ship of Her Own Making by Catherynne Valente

"One of the most extraordinary works of fantasy, for adults or children, published so far this century."--Time magazine on the Fairyland series

Twelve-year-old September lives in Omaha, and used to have an ordinary life, until her father went to war and her mother went to work. One day, September is met at her kitchen window by a Green Wind (taking the form of a gentleman in a green jacket), who invites her on an adventure, implying that her help is needed in Fairyland. The new Marquess is unpredictable and fickle, and also not much older than September. Only September can retrieve a talisman the Marquess wants from the enchanted woods, and if she doesn't . . . then the Marquess will make life impossible for the inhabitants of Fairyland. September is already making new friends, including a book-loving Wyvern and a mysterious boy named Saturday.

With exquisite illustrations by acclaimed artist Ana Juan, Fairyland lives up to the sensation it created when author Catherynne M. Valente first posted it online as a serialized novel. For readers of all ages who love the charm of Alice in Wonderland and the soul of The Golden Compass, here is a reading experience unto itself: unforgettable, and so very beautiful.

The adventures continue in the rest of the Fairyland series, including The Girl Who Fell Beneath Fairyland and Led the Revels There (Volume Two), The Girl Who Soared Over Fairyland and Cut the Moon in Two (Volume Three), The Boy Who Lost Fairyland (Volume Four), and The Girl Who Raced Fairyland All the Way Home (Volume Five.) Not since Oz has there been a land, or a cast of characters, so rich and entrancing. This deluxe paperback edition contains bonus materials, including interviews with the author and the illustrator.