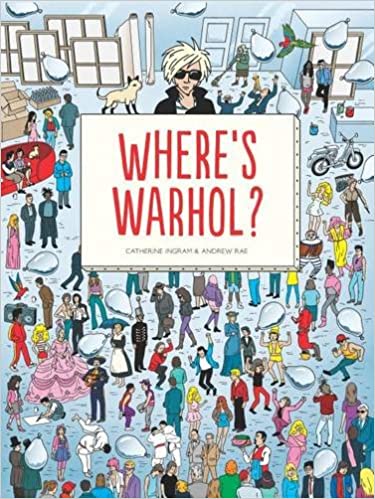 "Forget Wally: it's eyes peeled for illusive art phenomenon Andy Warhol, who is hiding inside some of the world's greatest art scenes. Look out for the likes of Madonna, John and Yoko – and, er, Vladimir Putin – as Warhol travels back through time and popular culture" Smallish

"As well as spotting Warhol in the throng on each of the 12 double–page spreads, it's thought–provoking and unexpectedly educational to discover figures such as artist Rachel Whiteread, potter Josiah Wedgwood, novelist Gustave Flaubert and architect/designer Walter Gropius appearing alongside the likes of rappers The Beastie Boys, actor John Travolta and singer Madonna. Well known artworks are also dotted around (think Damien Hirst's petrified shark, Jean–Michel Basquiat's signature street graffiti and Warhol's eponymous soup tins). Catherine Ingram's concise text gives a succinct insight into each scenario which lends gravitas to Andrew Rae's humorous and entertaining illustrations. We can think of no better way to look and learn at the same time" Design Buzz

Where's Warhol? is an original take on a classic format, suitable for all ages with full color illustrations throughout. Search for Warhol's distinctive figure while also learning about different art historical periods and movements such as the Renaissance, the French Revolution, contemporary and street art and so much more!

Andrew Rae's detailed illustrations provide a wealth of fun items and famous characters to spot, from Warhol's celebrity friends at Studio 54 to the masters of Modernism at the Bauhaus School and the street artists of today. This is the perfect gift for fans of Andy Warhol with a fun twist!