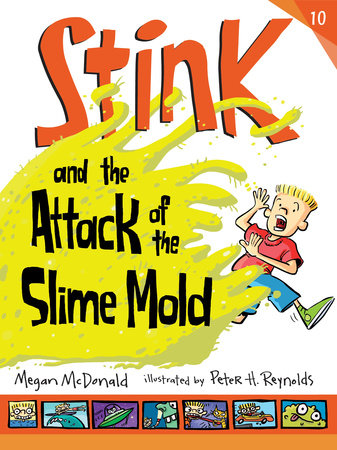 ABOUT STINK AND THE ATTACK OF THE SLIME MOLD

“This entry in the Stink series offers a good, simple story, along with snappy dialogue, bits of humor, and plenty of information about slime molds.” — Booklist

Glip! Glop! Gloop! What looks like dog vomit, smells like a corpse flower, and stars in one of the scariest movies Stink Moody has ever seen? Slime mold! Stink may be a super science geek, but even Dr. Stinkelstein is feeling freaked out about having a slime mold living and growing in his very own room. When Stink learns that these one-celled organisms are smart enough to find their way out of mazes and gang up on food sources, he wonders if they are smart enough to take over Stink’s pets, Stink’s room, Stink himself, and . . . the world.