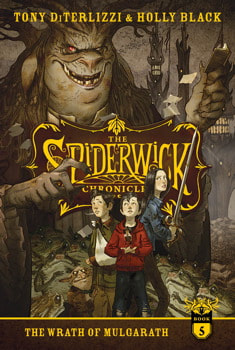 The Spiderwick Chronicles #5: The Wrath of Mulgarath by Tony DiTerlizzi and Holly Black

The Grace kids set out to rescue Arthur Spiderwick and defeat Mulgarath’s goblin army in this repackage of the fifth book in the #1 New York Times bestselling Spiderwick Chronicles.

Bruised and battered, Jared , Simon, and Mallory return home to find the mansion ransacked and learn that Mulgarath has made off with both the Spiderwick Guide and their mother! With only the help of Thimbletack, Hogsqueal, and Byron, the Grace kids have to defeat Mulgarath and his goblin army. But before they can face Mulgarath, they’ll have to rescue Arthur Spiderwick from Lorengorm and the elves.

In honor of the tenth anniversary of the #1 New York Times bestselling Spiderwick Chronicles series, which has more than 12 million copies in print worldwide, this edition of The Wrath of Mulgarath features a larger trim size and an original cover with all-new art from Tony DiTerlizzi.