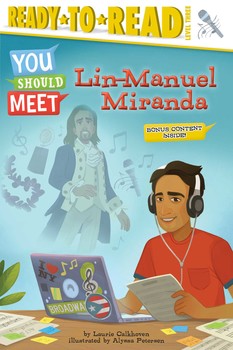 You Should Meet: Lin-Manuel Miranda (Level 3 Reader) by Laurie Calkhoven

Get to know Lin-Manuel Miranda, the award-winning creator of Hamilton: An American Musical, in this fascinating nonfiction Level 3 Ready-to-Read, part of a series of biographies about people “you should meet!”

Meet Lin-Manuel Miranda! Lin-Manuel is a writer, singer, actor, songwriter, and rapper who created the hit Broadway musicals In the Heights and Hamilton: An American Musical. He was also the cocomposer of Disney’s Moana and is the star of the upcoming film, Mary Poppins Returns, with Emily Blunt. His creativity appeals to children and adults alike and he has already won a Tony, Emmy, Grammy, and a Pulitzer Prize for his work. Learn all about how he grew up and the things he’s accomplished so far in this Level 3 Ready-to-Read that’s perfect for beginning readers.

A special section at the back of the book includes extras like the history of Puerto Rico and how to write a play. With the You Should Meet series, learning about historical figures has never been so much fun!