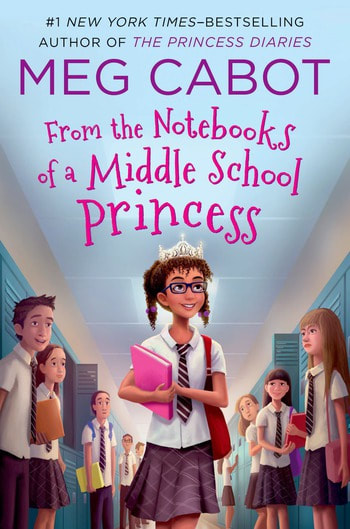 Return to the world of Meg Cabot's bestselling and beloved Princess Diaries series in From the Notebooks of a Middle School Princess--this time through the illustrated diary of a spunky new heroine: Princess Mia's long lost half-sister, Olivia!

“Author Meg Cabot is ready to put her tiara back on [with] a new character, Olivia Grace.” --USA Today

Olivia Grace Clarisse Mignonette Harrison is a completely average twelve-year-old: average height, average weight, average brown hair of average length, average brown skin and average hazel eyes. The only things about her that aren't average are her name (too long and princess themed), her ability to draw animals (useful for her future career as a wildlife illustrator), and the fact that she is a half-orphan who has never met her father and is forced to live with her aunt and uncle (who treat her almost like their own kids, so she doesn't want to complain).

Then one completely average day, everything goes wrong: the most popular girl in school, Annabelle Jenkins, threatens to beat her up, the principal gives her a demerit, and she's knocked down at the bus stop . . .

Until a limo containing Princess Mia Thermopolis of Genovia pulls up to invite her to New York to finally meet her father, who promptly invites her to come live with him, Mia, Grandmère and her two fabulous poodles . . . .

This is fun, illustrated middle grade—and this is the first series illustrated by Meg Cabot herself! The paperback features an interview with Meg Cabot and an excerpt of the next book.